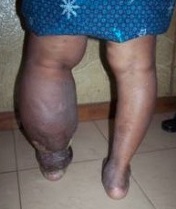 The incidence of lymphedema around the world is estimated to be 140 million. As many as 40 million exhibit symptoms of Lymphatic Filariasis (LF) disease, including lymphedema, elephantiasis, and hydrocele. Until the past decade, lymphoedema received little clinical attention and had been termed “the hidden epidemic”. The real number is probably higher due to insufficient diagnosis.

The true risk factor profile is not known. There may be many factors that predispose an individual to developing lymphoedema or that predict the progression, severity and outcome of the condition.
India constitutes approximately 45% of the world's burden of LF. In India, Lymphoedema is a major problem and despite a fall in the incidence of filariasis, the incidence of Lymphoedema is rising due to other causes such as cancer, trauma and venous diseases, etc. Since the disease is chronic and relentless, management of this disease has to be for life.

Lymphoedema can affect people of all ages. It can be congenital or can develop as a result of cancer or its treatment or due to trauma or chronic infection. It can occur in a limb or limbs or in the head and neck, trunk or genital area. It may not become apparent for some time after trauma (e.g. cancer surgery) and patients remain at risk of developing clinical lymphoedema at a later stage.
One point to note is that, oedema arising from venous insufficiency is not the same as lymphoedema. However, untreated venous insufficiency can lead to a combined venous/lymphatic disorder, which is treated much the same way as lymphoedema. 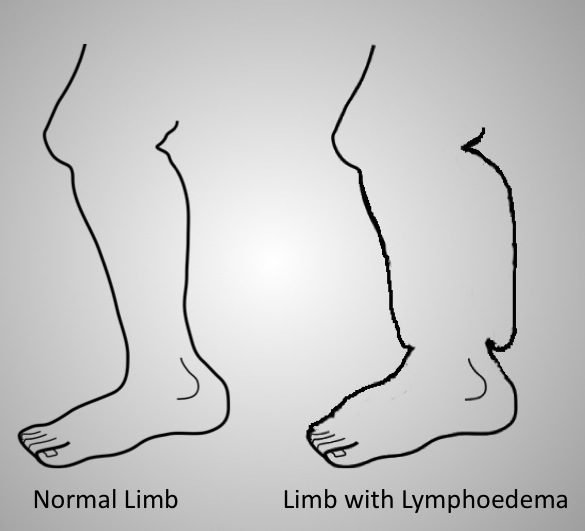 Lymphoedema is a chronic condition characterised by an abnormal collection of fluid (lymph), resulting in swelling of a limb/extremity. It is however, important to note that lymphoedema differs from oedema. Lymphoedema is high-protein oedema, resulting from failure of the lymphatic system, whereas oedema comprises of simply water. It is well-recognised that damage to the lymphatic system impairs the healing of both venous and non-venous chronic wounds(1).
The term lymphoedema was introduced in the early 20th century, when systems of manual lymphatic drainage (MLD) and comprehensive decongestive physiotherapy (CDP) entered common practice for lymph drainage. Before that time, for centuries, the term elephantiasis was used to describe the swelling that occurred due to lymphatic failure/valvular incompetence.
Lymphoedema has a multitude of causes. It can be inherited (primary) or may occur due to trauma (secondary). The most common cause in India is Filariasis. Filariasis is a parasitic disorder caused by worms residing in the lymphatic system. Other causes can include trauma, cancer, injury, venous diseases etc. These are showing a rising incidence which has changed the perspective of lymphedema from a poor man’s disease to one that affects all classes. The most common cause of secondary lymphedema, in developed countries, is cancer, especially after surgery. A study of the London population by Moffatt et al(1), reported a prevalence rate of 1.33/1000 of lymphoedema, rising to 5.4/1000 in the over 65-year age group. Lymphoedema secondary to malignancy has resulted in 60,000 new cases per annum in Shanghai alone(1). In Germany the estimates are around 120,000, including 40,000 with primary lymphedema and 80,000 with secondary lymphedema. 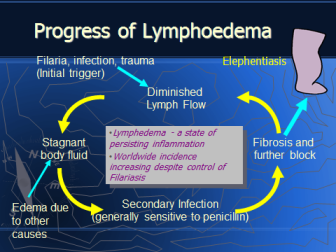 Lymphoedema is now recognised as a state of chronic and continuing infection as well as inflammation. It results when lymphatic vessels are either damaged or impaired. When the impairment becomes so great that the lymphatic fluid exceeds the lymphatic transport capacity, an abnormal amount of protein-rich fluid collects in the tissues of the affected area. If left untreated, the stagnant lymph increases in amount and could affect oxygen availability, and interfere with wound healing. More importantly, it provides a culture medium for bacteria, making infection (lymphangitis) a very common complication of accumulated lymphatic fluid. Any anti-inflammatory action has to start from the groin or axillary nodes which are either absent, damaged or in any case, far removed from the site of infection. Such attacks of infection thus worsen the disease condition by causing blockage of existing lymph channels and slowing up the process of lymph regeneration. Infection also induces fibrosis as well as increases the fluid content of the limb. Thus, an untreated patient with a swollen limb gets sucked into a vicious cycle of accumulated fluid – causing infection and further blockage causing even more oedema. Finally we have a patient with large fibrotic elephant hide type limbs – called Elephantiasis.

To learn more, read our ebook on Lymphoedema care. For any enquiries, email us at sales@amlamed.com. All enquiries will be responded to in 1 - 2 working days.